A hub for oncological orthopaedics and other pathologies that can only be treated in specialist centres outside the island and, in some cases, abroad. The agreement between the Emilia-Romagna Region, the Sicilian Region and the Rizzoli Orthopaedic Institute of Bologna has been renewed for ten years with this main objective.

The content of the agreement were illustrated today at Palazzo Orléans, seat of the presidency of the Sicilian Region, by the Regional councillors for Health of Emilia-Romagna and Sicily, Raffaele Donini and Ruggero Razza, by the Director General of the Rizzoli Institute of Bologna, Anselmo Campagna, and by the Director General of the Strategic Planning Department of the Sicilian Department of Health, Mario La Rocca. 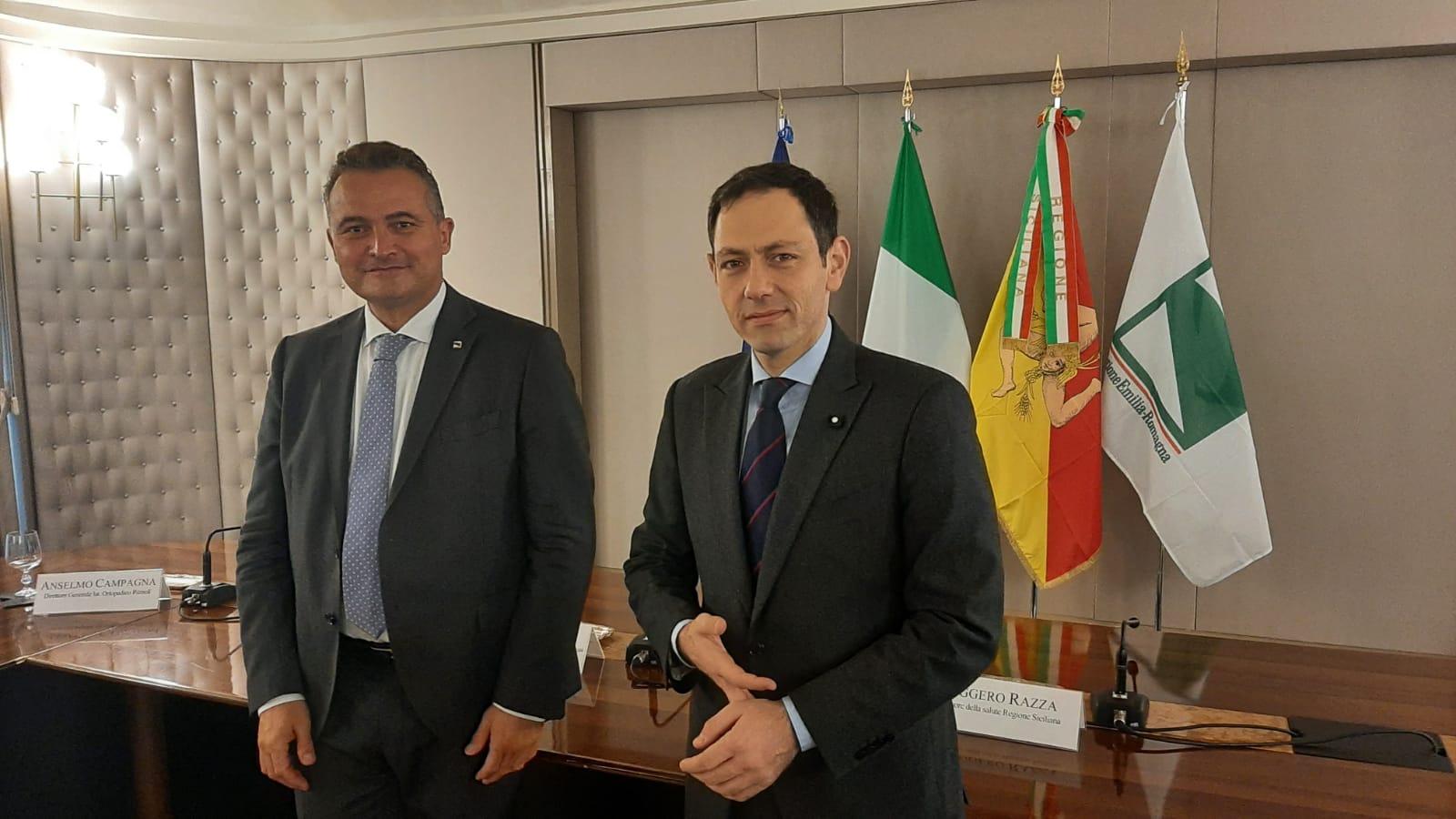 Among the issues at the centre of the agreement are: the strengthening of the Rizzoli-Sicilia department in Bagheria (Palermo), where approximately 1,500 operations and more than 15. 500 specialist examinations per year are carried; the strengthening of highly specialised activities in the fields of oncological, upper limb, paediatric, spinal and rehabilitation orthopaedics; last but not least, the creation of two outpatient clinics for rare skeletal diseases and oncological orthopaedics, which will lay the foundations for an oncological orthopaedic reference centre (it will also be available to patients from other regions).

The agreement also provides for an increase in the number of intensive care beds to be added to the 53 orthopaedic and rehabilitation beds, three operating theatres and five outpatient clinics already existing in the Bagheria facility. In the field of research, the aim is to technologically upgrade the facilities and to obtain recognition as a Scientific Institute for Hospitalisation and Care (also called IRCCS, the Italian acronym) for what is now the Sicilian Rizzoli Department. In addition, collaboration with sector bodies, institutions and Sicilian universities for training activities is also envisaged.

"This new phase of the Rizzoli Sicily Department confirms the ability of our Health Service to respond to the health needs of citizens. The Rizzoli Orthopaedic Institute represents a national and international reference centre for the most advanced orthopaedics, from a clinical and scientific point of view, with cutting-edge research excellence and innovative clinical solutions for the most complex problems. The renewal of the agreement between our Regions signed today reaffirms and expands the significance of the development of the Rizzoli in Sicily", Councillor Raffaele Donini said.

“We can say the partnership is at a turning point. We have been working for a long time to renew a commitment that will make Sicily a real reference point not only for our fellow citizens, but for the whole of Southern Italy. The heart of this new agreement is represented by a single booking system between Sicily and Bologna, which will allow all Sicilian patients to be treated at the Rizzoli in Bagheria, a public hospital, contributing to a further reduction in ‘passive mobility’ (i.e. mobility from one Italian region to another for health reasons), already gradually decreasing in recent years", Councillor Ruggero Razza said.

“Rizzoli has always believed in this project," emphasised the general director of the Irccs-Ior Rizzoli, Campagna, "as demonstrated by the investments made, the staff selected and trained, the continuous collaboration with the Bologna office and with the Sicilian health bodies. Our reason for being (both in Bologna and in Sicily) is the treatment of the most complex cases, those that can only be solved in a single-specialty hospital with a strong vocation for research. A Rizzoli department in Sicily is a choice of development in the collective interest, and our commitment continues in this direction".

Milena Fini Scientific Director
Former director of a Rizzoli research laboratory, she will take office on 1 July
Read more
News
“FibroCOVID”
Rizzoli-coordinated study reveals links between COVID-19 and fibromyalgia
Read more
News
Freezing the tumour with cryotherapy
At the Rizzoli Institute the first 6 patients suffering from desmoid fibromatosis were treated with this technique
Read more
END_OF_DOCUMENT_TOKEN_TO_BE_REPLACED
Back to top